Yagyu Renyasai and the Yagyu Tsuba 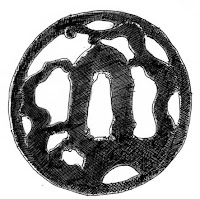 Miyamoto Musashi might be the best known, but he was not the only bugeisha who was intimately connected with the visual arts: Yagyu Renyasai (1625-94), headmaster of the Owari branch of the Yagyu Shinkage Ryu, is well known for the the tsuba he produced as well as being a master swordsman. These are fairly well-known amongst sword (and tsuba) collectors, but martial artists seem less familiar with them, and there is very little written about them in English.

I first saw pictures of them in Dave Lowry's book, Autumn Lightning, which was also the first time I had really heard about the Shinkage Ryu. What struck me about them was the way in which they incorporated elements of the school's strategic principles into the design. Later, when my language ability had inched it's way up to a suitable level, they were one of the first things I researched in Japanese... greatly aided by a combination of pictures and short captions, I was just about able to make some sense of what I was reading.

The world of swords and their accoutrements is a large and complex one, particularly when it comes to appreciation and collecting, and my knowledge is admittedly slight. As seems to be common in many fields, there is a mixture of truth and story in the sword world, and ferreting out verifiable facts is not easy - it is quite common to repeat stories but they are not always substantiated.

As with many Japanese crafts, the making of tsuba was often a collaborative effort, and Renyasai employed skilled specialists at different stages of the operation. The basic tsuba were forged by a number of different smiths - among whom, it was said, was Kotetsu Gozaemon. The story goes that these rough pieces were placed in a rice mortar and Renyasai pounded them with a heavy mallet to test their durability. Those that survived unharmed progressed to the next stage, which involved working the designs into the metal, through a variety of drilling, cutting and filing processes. The designs themselves are also the subject of some uncertainty, though the best were traditionally all ascribed to the painter Kano Tanyu. An examination of the dates involved makes it unlikely he designed all of them, but it is possible that he designed some of them. The metalwork was performed by members of the Goto family. After they had been shaped, they would be tested again with, as the story goes, an axe. Those that passed were accepted, and were then patinated to give the desired finish.

There are several points here that I'm not sure of - it seems that the Yagyu family has an album of tsuba designs which includes stories about them, several of which have become quite well known. There are some doubts as to their authenticity - the collaborations with Kotetsu, Kano Tanyu and the artisans of the Goto house have not been proven, and in fact, seem unlikely, though I have seen suggestions that Kano Tsunenobu, Tanyu's nephew, was involved in the design stage. The connection with the Goto house, who were, among other things, keepers of the Tokugawa mint, has actually been described as 'unthinkable'. Likewise, the picturesque story of Renyasai pounding tsuba in a rice mortar seems to originate from 19th century sources.


On the subject of mortar pounding, here is a short section written in the early 1900s, taken from Jim Gilbert's site on tsuba,

"As to the mortar story. It is very doubtful, for what use was there in pounding them up? Is this the proper way to test a tsuba? There are certain methods in trying weapons, if one wishes spoil anything by rough usage. One might smash even a Myochin armor or a Bizen sword. To pound tsuba is the same. Mr. Yagyu is the man known as the best fencer and a clever man appointed by the 2nd or 3rd Shogun Tokugawa. If so he would not dare to play such a foolish game. This opinion must be taken from tradition of Yagyu people, or storytellers' jokes. Since I was a young man I have seen may thousands of tsuba, but only two or three with sword marks (kizu). So that we must think whether tsuba were struck by the sword in actual fight. In real fighting it is a question of a moment whether to kill or be killed. Why should one prefer to cut an arm rather than a head, which would not kill. After examining many blades a tsuba, not only with sword marks, almost no mark is seen on the habaki moto, but generally near the boshi. The mementos of the fighting period: Kamakura tsuba are very thin, Kanayama as well, especially the later ones have large piercings, which made them look very dangerous for real fighting, besides, the work of Kaneie I, Myoju, are thin, especially that of Myochin. Not only are they thin, but even made of shakudo, copper, or brass, and those soft metal tsuba are not thick. All these facts suffice to kill the story of pounding tsuba in a mortar. Some people might say that most of the tsuba made by armor makers are thick, that proves that they were made for defense. So that Yagyu's mortar trick was not so foolish. That opinion at first sound reasonable, but I can't agree with it, as my idea is that the thick heavy tsuba was intended to give weight to the hand, so as to give a greater strike (momentum) to the hand."
Note that Akiyama was born in 1843 and was at age 9 named a page under lord Yamanouchi Yodo Toyonobu of Tosa. Akiyama was not only an authority on sword fittings, but also grew up wearing swords.
(originally from the early 1900's journal "Token Kai Shi" part four, Articles by Akiyama Kyusaku Translated by Henri L. Joly, Annotated by Robert E. Haynes)


I must say that although the tsuba is not meant to be used as a defense, it would require a particularly bold swordsman not to have one on his sword, although this was, in fact, the case with one of Uesugi Kenshin's swords. Yagyu tsuba are very sturdy in feel and appearance, and I am sure this reflected the practical value of swordsmanship. However, testing with an axe, although possible, would have left its mark on the metal, so this must be regarded as nothing but a story (or an isolated incident).

There also seems to be no reliable record of Renyasai's personal role in all of this - presumably he oversaw the process, offering opinion and suggesting changes, as Rikyu did with the artisans who worked for him. Whether or not he had a hand in the physical work is something we don't know - it is quite possible that he supplied rough designs which were worked up further by skilled artisans. As for the designs themselves, it has come to be accepted that they reflect aspects of Yagyu heiho, or martial arts, and I shall discuss this next.
Posted by Chris Hellman at 07:30