2020 is, in the Japanese tradition, the Year of the Rat (or mouse...take your pick – the term nezumi covers both in Japanese). The rat is usually considered a symbol of good luck, being associated with Daikokuten, the god of wealth. This association is usually explained as rats and mice being attracted by wealth (i.e. surplus food), and so signs of rodent activity, particularly nibbled mochi at New Year, were traditionally seen as good luck. It was also believed that rats stored up food for the winter, and this added to their reputation as animals of good fortune.

Kobayashi Issa reflected something of this in the following haiku:
New Year's shelf –
from a dark nook
a lucky mouse

Connections with the bushi are, not surprisingly, not particularly common – warriors generally took more powerful animals as their symbols. The timorous mouse seems an unlikely symbol for a class that prided itself on courage. Rats, however, can be bold: Neko no Myojutsu (The Mysterious Skills of the Old Cat) is a well-known story that concerns one such animal. A ferocious rat is wrecking havoc in the house of a samurai, Shoken.


The rat proves too strong for his house cat, and even Shoken himself finds himself in trouble when he confronts it, so he enlists the aid of the local cats, famous for their rat-catching skills. Alas, they are also no match for the rat. whose speed and ferocity prove too much for them.


Finally, much to their surprise, Shoken's final gamble – a famous mouser whose rat-catching days seem long gone – pays off, and the old cat succeeds in catching the rat with ease. Later that evening, Shoken overhears the old cat explain how he was able to succeed where the others failed. This explanation is an account of some of the mental teachings involved in swordsmanship, and is said to have been connected to (or even part of) the teachings of the Itto ryu. For those interested, several translations are available...mine is available here.

Rats featured in other stories as well. This one is from a children's story book, Neko Nezumi Kassen (The War between the Cats and the Rats), illustrated by Utagawa Yoshitora c1840-1860, a one-time pupil of the famous Utagawa Kuniyoshi. 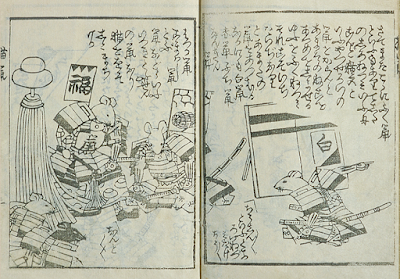 In the story, the general of the cats decides to attack the rats, and battle ensues...
The text for these pages reads:

On the other side there was a rat general called Lucky Rat. One day, the white rat, the general’s lieutenant, rushed in, gasping for breath, “Emergency, emergency!” White Rat: “It is terrible! Cat General Nekomata is on his way to attack us with a huge army. They are almost here.” Lucky Rat: “What? This is a crisis!” Lucky Rat immediately called on his mighty warriors among the white rats, red rats, tortoise-shell rats, China rats, mice, top-spinning rats, sewer rats, and with all others waited for the cat army to arrive.

This battle ends happily for both sides with deus ex machina in the form of the intervention of ...Daikokuten.

Although rats and mice were not closely linked to martial culture, Minamoto Musashi's 'Rat's head – ox's neck' (or horse's neck – the character is very similar, and as the original no longer exists, it is not possible to say which was originally intended) from the Fire Scroll of Gorin no sho should not be forgotten. The contrast between these two elements is a reminder to maintain a dual perspective that sees detail at the same time as the broader picture. Musashi noted that this is important in both small and large scale combat.


Although Musashi left no examples of rats or mice in his art, several artists have found them to be fine subjects – netsuke artists in particular, took advantage of the qualities offered by the rat/mouse's
form. However, rather than netsuke, I will finish with a painting by Watanabe Shōtei which nicely displays his controlled and elegant brushwork.