Just last week I finally took my long awaited trip down to Kyushu, where one of my primary aims was to visit the Shimada Bijutsukan, which keeps a handy collection of stuff related to Miyamoto Musashi.

Kumamoto, where the museum is, was the city where Musashi spent the last few years of his life as a guest of the Hosokawas. Kyushu itself was, possibly, also an area where he had spent quite some time earlier in his life. If we are to believe the account in the Bushu Denraiki, he was involved in fighting here during the Sekigahara campaign, rather than at Sekigahara itself (which is the more common version of events). Sekigahara, by the way, is located somewhere between Kyoto and Nagoya, far away from Kyushu. Musashi's father was also down in Kyushu, and it is thought Musashi visited him.

Kyushu was also far way from the centre of power in Edo - by this time in his life it seems that Musashi had given up whatever ambitions he may have had with regard to fame and power, and so had no particular reason to remain in Honshu.

Shimada Bijutsukan
The Shimada Museum is only a short taxi ride from the main station, but already it feels like the outskirts of the city - I guess it is really, as the main station is on the western edge of the city rather than in the centre. I had imagined it to be in a more built-up area, but it's a mere stone's throw from the mountains, in a sleepy residential street with wide grass verges and little expectation of a taxi dropping by if you might need one. 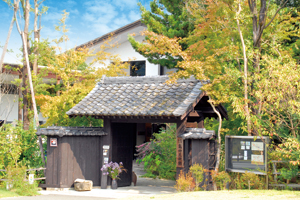 It has a nice entrance-way, opening onto a courtyard of what used to be the Shimada family villa, with a very underused looking tea shop to the left and the main gallery straight ahead. It looked more like an off-season pension - friendly but needing a bit of yard work - than the repository of irreplaceable art treasures.

Of course, I was there for the exhibits, so I didn't linger outside for too long, but went inside, paying my entrance fee and heading straight for the Musashi gallery, which was a smallish room with display cabinets along the walls and one in the centre. It wasn't large, but there was more genuine Musashi memorabilia gathered there than in any other place I had seen - (which wasn't saying much, as it's seldom that more than a couple of pieces are assembled in any other venue).

Photos were out of the question, of course, but from memory, there were two of his own sumi-e works (a small landscape and a goose in flight), his famous self-portrait, a mounted section of notes written for Gorin no Sho, two swords in (probably) modern mountings, a bokuto said to be a version of his cut down oar as used for his duel with Sasaki Kojiro, but actually made in the Meiji period, a sword reputed to be Sasaki Kojiro's, several other portraits of Musashi including the famous one of him when he was a teenager, one of his namako tsuba, a version of his Dokodo, a version of Gorin no Sho (although it looked rather too modern to be one of the originals) and a case with some early Showa period comics and books etc. There could possibly have been one or two other things, but that was about it.

Only a small room, but it was worth the visit. Unfortunately, the glass cases got in the way of examining the swords and made it very difficult to see the koshirae in any detail (though they were clearly fine examples of Higo - that's Kumamoto area - koshirae). Looking at the paintings was quite enlightening and, as nearly always, seeing the originals was a very different experience from looking at reproductions in books or on websites. You are far more able to understand the skill and technique of the artist when you see the originals.


I was especially struck by several features of this painting that simply do not show up on any of the reproductions I have seen. It is usually described as a self-portrait, and despite it being in a different style from Musashi's sumi-e works, there is no particular reason for doubting it. What is almost certain, however, from seeing it close up, is that Musashi had studied painting from a teacher - there are some specific techniques, particularly the pattern on the red robe, that it is very unlikely Musashi would have used (or could have used?) without instruction. Wilson barely touches on this in The Lone Samurai, and assumes Musashi signing his name in the register of Hosokawa's court artist of the Yano school was a mere formality - I question this and, as the Yanos were artists of the highest quality (as I saw in this visit) think it highly likely Musashi did take formal instruction with them. (By the way, Wilson is about the only writer who deals with Musashi's art seriously, and he is pretty good on it, so I recommend reading his book).

Of course, in Gorin no Sho, Musashi says he had no teachers, but he also says that was the first time he had written about the principles of his style, which seems to discount Heiho sanjugokajo (35 Articles on Strategy).

As with most such places, there were English titles to the exhibits, but the explanations were in Japanese. Unfortunately, they were mainly for the casual visitor, so they tended to shy away from dates and definite details and dealt in generalities. Were the koshirae of those swords supposed to have been Musashi's? Or based on some description of his koshirae? It didn't say. If this was the dokodo, what about the one I saw at the Prefectural Museum later that day? Were there two copies? And what about that suspiciously modern modern looking Gorin no Sho?

There were other galleries in the museum - it seems to show quite a lot of modern craft on a regular basis, and have seasonal exhibitions of 'samurai' related art... a big show of swords and koshirae, by modern makers, when I was there, but I didn't have time to take this in properly.

Of course, I recommend it - for Musashi afficianados, especially. A word of warning - be prepared for problems in getting away from the museum - a long walk or a long wait for the bus are likely prospects unless you are lucky. I was lucky, and while waiting for the bus in 33 degree sunshine and no shade, hailed  one of the few passing taxis and was whisked away to further sites of interest - Kumamoto castle and the Prefectural Museum.